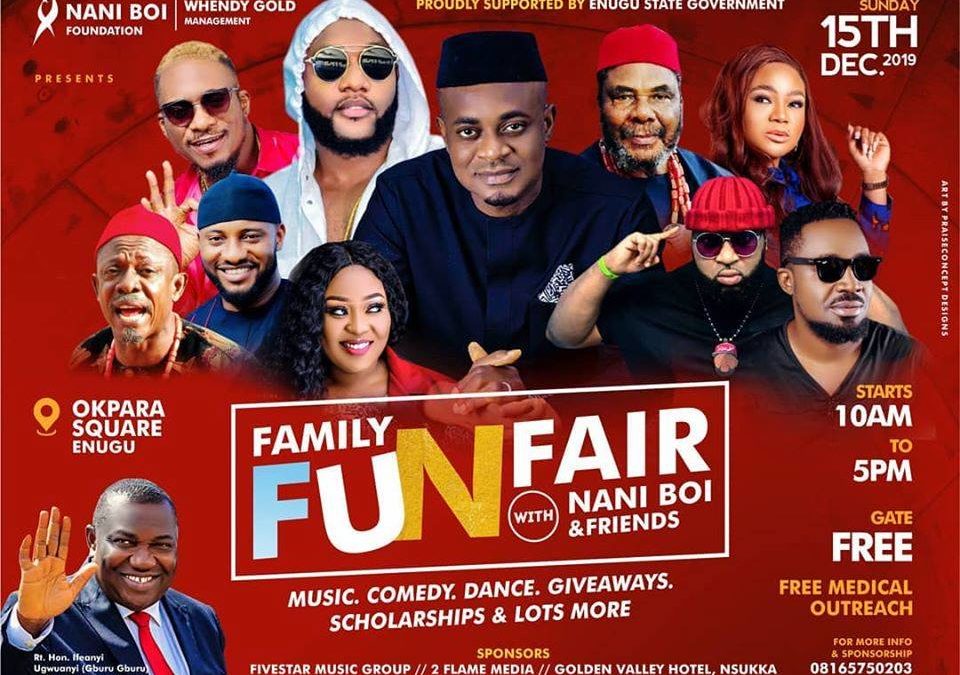 On Sunday, December 15, between the hours of 10am to 5pm, all roads would lead to Okpara Square, in Enugu State, for Family Fun Fair with Nani Boi and Friends.

The event which is powered by Nani Boi foundation promises to be lots of fun with games, music and comedy from top Nigerian celebrities as well as massive empowerment of the poor masses.
According to the organizer, Nnaemeka Charles Eze, popular known as Nani Boi, more than 100 poor people be given N10,000 each for Christmas while thousands of others would go home with special gift items plus few others that will be awarded scholarships.

“There will be games and competitions and participants will be well compensated. We also have bouncing castles and the likes for kids to enjoy while Bestie Noodles would serve well cooked noodles.

The idea behind it is for families to gather under one umbrella, have fun, eat, drink, dance, merry, win cash gifts and other gift items. In fact, it’s a way my friends and I, want to support families this season and as well give them fun/entertainment like never before. It’s an annual event and this is the maiden edition. Enugu state government is supporting us and we are also partnering with them and the force to ensure tight security.” he said.

Family Fun Fair with Nani Boi and Friends will be graced by the executive Governor of Enugu State, Ifeanyi Ugwuanyi, his cabinet members as well as other top Nigerian celebrities in likes of Pete Edochie, Nkem Owo, Tony Oneweek, Yul Edochie, Kcee, Slow Dog, Rachael Okonkwo, Mr. Raw, Harry B and many more.